Aviva Premiership 2017 Team of the Season

The regular season of the 2016/17 Aviva Premiership has reached its conclusion, and we take a look at the standout players of the season, as well as those who deserve an honourable mention.

The regular season of the 2016/17 Aviva Premiership has reached its conclusion and finds Wasps sitting pretty at the top of the table, though only by virtue of a greater number of wins than the indefatigable Chiefs who share their points total.

While Wasps had their share of standout performers over the season, including our player of the season (and in truth, probably (and deservedly) everyone else's!), there are a great spread of performers across all the teams. This is a great representation of how fierce the competition has been this season, from the top to the bottom of the table.

Jimmy Gopperth has had an excellent season, topping our fantasy rugby player list for total points, as well as being one of the main protagonists in Wasps' excellent form this season. His best game was perhaps the fixture at home to Gloucester in gameweek 16 where he bagged a hat-trick, though Wasps' defeat of Newcastle in gameweek 7 comes close.

Given that the New Zealander is 33 years old, it just goes to show that class is permanent, but in Gopperth's case, form also seems to last forever.

Topping the points chart for the regular season, we've chosen Gopperth as our captain and kicker.

Rugby Magazine Team of the Season: 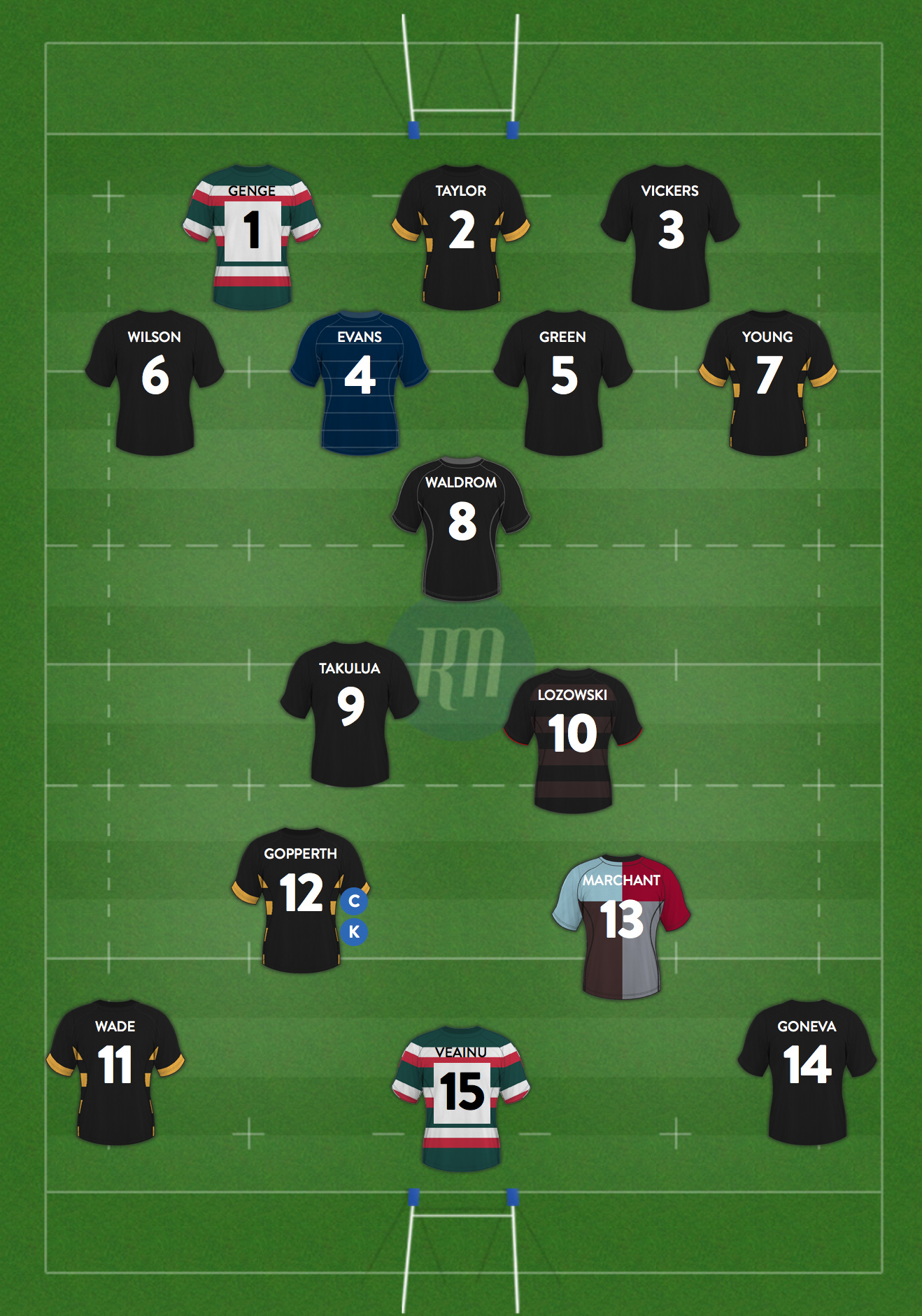 Ellis Genge has had a superb season for Leicester; solid in the scrum, and provided plenty of metres going forward. He will be looking forward to establishing himself further for England on their tour to Argentina during the summer.

Newcastle have shown they are a club on the up over the course of the season. Their performances at Kingston Park have seen them push hard, and at times overcome superior opposition, and one of their key performers has been Rob Vickers. While he hasn't been racking up the metres going forward, he has been strong defensively, and performed consistently over the course of the season.

Mr. Taylor has had a great season with Wasps; great in the lineout, going forward, and a mighty workrate. How long until he starts being talked about for an England berth?

The quiet workmen have won the day here, with both choices sitting comfortably with their clubs in mid-table. Calum Green has been ever present in the Newcastle second-row and his consistency has undoubtedly been one of the reasons that Newcastle have looked so strong this season. Again, like Vickers, his defensive work has been top-notch.

Bryn Evans has also been ever present this season for Sale, and it's hard to argue against his performance away to Wasps in gameweek nine as the best of the season for any player. As well as his consistency, he has performed superbly in the lineout this season, and his steals have provided key relief for Sale this season.

Tom Young has provided plenty of metres going forward, alongside strength in defence. His reading of the game has been a key part of Wasps' rise to the top this season and it's almost a shame that Wales are so blessed in the back row.

Testament to the season that Newcastle have had, and the pack that Dean Richards is building at Kingston Park, are the number of players we have chosen, and indeed pushed close for places in this team of the season. Another consistent performer who, in our opinion, should really be playing for England, is Mark Wilson. His performances really came to the fore over the middle of the season and put Newcastle in a strong position for qualifying for the European Champions Cup. While this didn't materialise this season, Mark Wilson will certainly be a major part of their push next season.

Another solid season for Thomas Waldrom at Exeter this season saw him rack up 10 tries, as well as looking good in both attack and defence. While he sat out the last few rounds, with Rob Baxter undoubtedly having an eye on the playoffs, his performances through the season have been exceptional; he is a large part of Exeter not having lost a game since round 7 (and that a last minute try from Bath at Sandy Park).

Another Newcastle player to make it into our team of the season is Sonatane Takulua, who pushes aside Kahn Fotuali'i and Francois Hougaard for the number 9 spot. Hougaard showed his class in his appearances at Worcester towards the end of the season, and Fotuali'i gave Bath the needed drive with his distribution, but neither can match the great season that Takalua has had. While he started the season quietly, he has grown steadily, and his performances over the middle and end of the season were a large part of Newcastle's performances.

When Charlie Hodgson retired at the end of last season, most were eager to see who would replace such a stalwart of the game at Saracens. Given that Owen Farrell is the first name on Eddie Jones' team sheet, it was important that Mr. Hodgson's shoes were filled adequately. Of all of the break through players of the season, Alex Lozowski is certainly the foremost. His opening performances of the season were nothing short of magical, and while he has shown some inexperience with his game management at times, he is certainly destined for a great career. Despite having been involved in every fixture this season, he will no doubt be relishing the opportunity to tour with England over the summer.

We've chosen to include Gopperth in the centre in our team because he has started here for 15 of his appearances over the course of the season. As we said above, Gopperth is the standout performer across the league this season, and a big part of Wasps' rise to the top.

Joe Marchant has performed admirably over the course of the season too, and his strong performances have earned him a place in Eddie Jones' squad for England over the summer. Marchant does just sneak into the team ahead of another outstanding performer this season, Juan Pablo Socino, who has proven himself to be an integral part of the spine of the Newcastle team that has seen them perform so well over the course of the season.

Vereniki Goneva has muscled Olly Woodburn out of our team despite having scored only 9 tries to Woodburn's 10, by virtue of the fact that he has made a huge amount of metres on average per game: 90 to Woodburn's 64. This has been a huge boost to Newcastle going forward this season, and we expect him to be one of the first players on our fantasy managers' team sheets next season.

Despite only having made 11 appearances over the course of the season, these have been so good that he nudges himself ahead of Jason Woodward and Michael Haley who have both performed well for their clubs this season. With no disparity between the three for tries, it is Veainu's average of 83 metres per game that stands him well above the other two.

The Scots are coming!