With the group stages now concluded, the business end of the tournament starts. As we enter the knockout stage we look back upon 5 classic quarter-final matches in Rugby World Cup history.

The Rugby World Cup in Japan has had it all - tries, great running rugby and some surprise results backed up by unbelievable support from the fans. A special mention to the host nation, Japan, deservedly reaching the quarter finals for the first time, a superb effort. This has all been tempered with some controversy including refereeing decisions and cancelled games. One thing's for sure, the 2019 showpiece event has certainly not been boring.

It all kicked off in the beginning of this game, quite literally. A huge punch up from the kick-off between both packs set the tone for a fired-up Ireland to push Australia all the way to the final whistle. Gordon Hamilton, the Irish flanker sitting with his one arm punching the air in the corner on the Lansdowne turf is one of the iconic images of the 1991 World Cup. The Irish fans euphorically spilled on to the field thinking a semi-final with the All Blacks was on the cards. Only six minutes remained when Hamilton scored the try to put Ireland in the lead 18-15 in what looked to have all the makings of a monumental upset. The Wallabies had other ideas, though. A well worked backline move from a scrum 10 odd metres from the Irish try line proved to be decisive.

Stand-in captain Michael Lynagh was on hand to break Irish hearts by scoring late on after picking up a loose ball from David Campese in the corner.  Campese was at his influential best during this affair, scoring a brace of tries for the southern hemisphere side. The first included a superb sidestep by the No 11 off a scrappy lineout and his second came from a well-worked backline move with fullback Marty Roebuck playing provider for Campese for a simple dot down. Ireland’s Ralph Keyes was slotting over points with the boot at regular intervals for the home side, ending the game with fourteen points. Unfortunately for Ireland, Hamilton’s try didn’t quite get them over the line in one of the great quarter finals. Australia went on to beat the All Blacks in the semi-finals and then England 12-6 in the final at Twickenham to lift the Webb Ellis Cup for the first time. 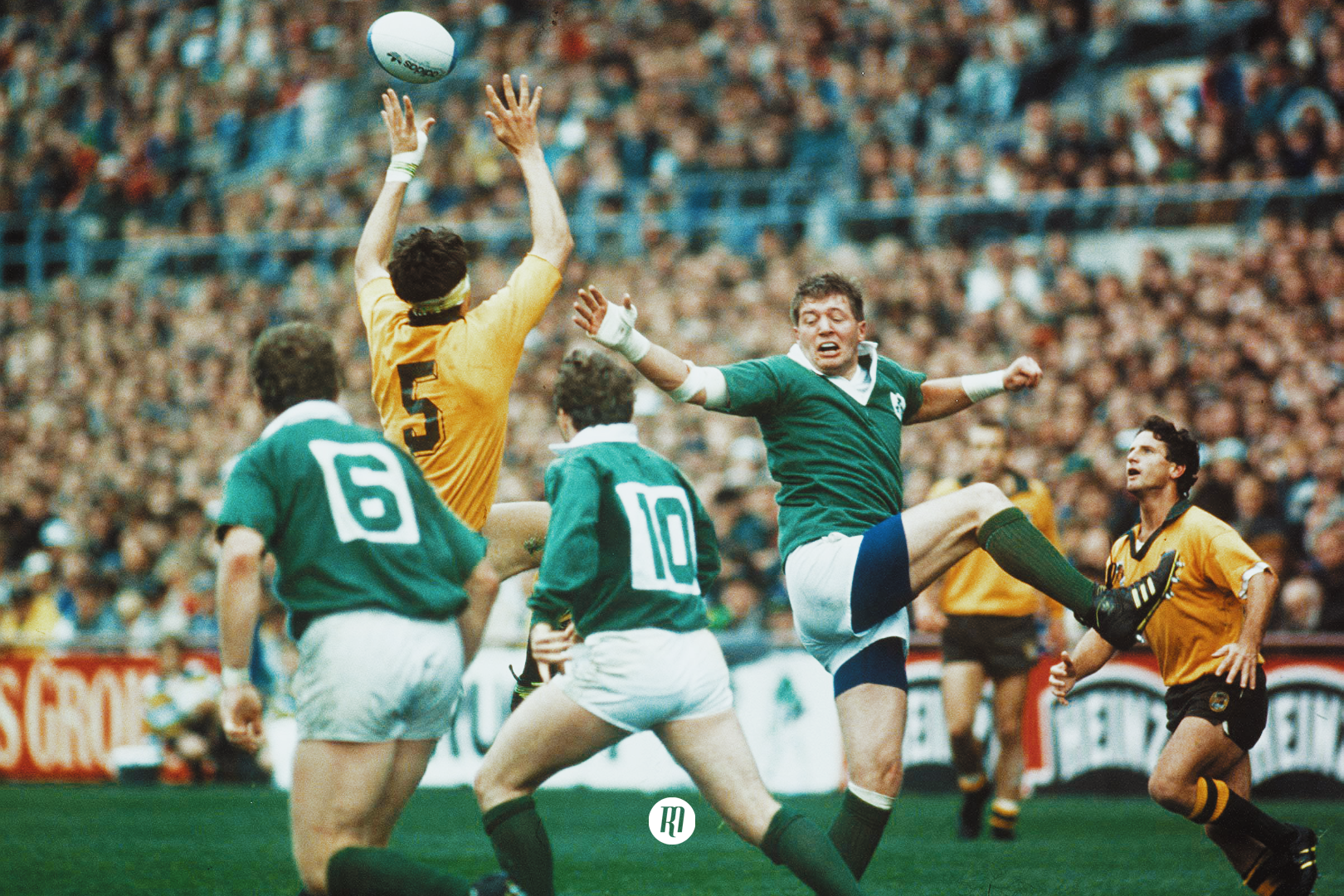 Jannie De Beer etched his name in the history books with a kicking display that rocked the core of Clive Woodward’s England team. It was later stated that this particular loss lay the foundations for England’s 2003 World Cup success. The game itself was a battle of attrition and didn’t provide the tries or fluid rugby that other knock-out games did. However, it still had all the drama. A kicking masterclass of the highest order from De Beer as he bagged thirty-four points with the boot including a world record five drop goals and a 100% kicking rate from the tee. The game proved to be a clash of the set piece and tactical kicking was at a premium.

Tries by Joost Van Der Westhuizen and a late try by Pieter Rossouw meant that the Springboks would face Australia in the semi-finals. An impressive performance by current Springbok coach Rassie Erasmus on the side of the scrum was one of the few stand out performances - apart from De Beer. England’s Paul Grayson kicked eighteen points with a certain Jonny Wilkinson coming off the bench to land a single penalty. The game was extremely close until the closing 10 minutes where South Africa managed to create daylight between themselves and England through De Beer’s boot. A twist of fate in extra time in the semi-final saw an extremely rare Stephen Larkham drop goal knock Nick Mallet’s side out of the 1999 World Cup.

Clive Woodward’s side were severely tested in the Suncorp Stadium during this quarter final but it must be said they were too good for Wales when it mattered. Despite Steve Hansen’s side throwing the ball around at will and scoring three tries to one, it was Wales who were on the plane back home from Australia after an entertaining quarter-final match. Wales' first try was outstanding, seeing a superb bit of running wizardry by Shane Williams to put Stephen Jones over in the corner. A driving lineout saw Colin Charvis stretch over the whitewash for the next five pointer and Martyn Williams gathered a loose ball after a cross-kick to dot down for the third. Wales were fantastic. However, England squeezed the life out of their rivals with consistent pressure and penalties, with Wilkinson scoring twenty-three points on the day.

At one stage it looked like a potential upset could be on the cards but an inspirational performance by substitute Mike Catt proved to be the tonic to settle England nerves. Will Greenwood scored one of the great World Cup tries after a sublime run by fullback Jason Robinson, who danced his way through numerous Wales defenders before passing to the England centre.  England went on to beat France in the semi-final before winning the tournament for the first time. After this gruelling encounter Woodward said “We’re extremely relieved but it was about winning. We’ve come here to win the World Cup and hopefully we will fire on all cylinders next week”.

An upset of seismic proportions and another knockout blow for tournament favourites New Zealand. This was to be the last failure for the mighty All Blacks and they have not lost a Rugby World Cup match since this defeat. The scene was set with Raphael Ibanez and his men staring down the haka from close quarters in one of the great spectacles of world rugby. Richie McCaw’s side were looking comfortable, leading 13-3 at half time. A well worked Luke McAlister try in the first half being the highlight when the No 12 ran a delightful line to break the French defence. Then came one of the great fightbacks of World Cup rugby that only the French can perform.

A try from flanker Thierry Dusautoir brought the men in blue right back into this game. This was followed by a controversial try by Yannick Jauzion to give France the lead. In the build up to the try Damien Traille took a half gap feeding a forward pass to Frederic Michalak which wasn’t picked up by Wayne Barnes and his assistants. Michalak subsequently swivelled near the try line and fed the Toulouse centre for the match winning try. A large contingent of jubilant French fans made their way over to Cardiff for this famous victory. Subsequently, they were looking forward to a home semi-final against England, which they eventually lost 14-9 to in a fiercely contested game. Notably, this was the first time in World Cup history that New Zealand didn’t qualify for the semi-finals.

Unfortunately, this quarter final will be remembered for the controversial refereeing decision by South African referee Craig Joubert. It was, however, an outstanding game of rugby. Scotland were penalised for a deliberate offside when the ball seemed to have come off a Wallaby from a clumsy lineout tap by Scotland in the 80th minute. Australia dominated the territory with 62% as well as bossing the possession, but this didn’t stop the game from being an absolute nail biter.

There were tries a plenty at Twickenham, eight of them to be exact with five of them being scored by Australia. However, Scotland led 16-15 at half time. Two tries by Drew Mitchell for the Wallabies as well as a five-pointer by fellow wing Adam Ashley-Cooper were key in setting up this Wallaby victory. Greig Laidlaw contributed nineteen points with the boot in what was an inspired shift by the Scotland captain who nearly kicked them to victory.  A Mark Bennett intercept try in the 74th minute looked as though it had got Scotland over the line as they led 34-32 going in to the final few minutes. The contentious Joubert call meant that Australia went on to meet Argentina in the semi-final. Scotland coach Vern Cotter stated “It’s pretty tough, the guys played very well, they never let go and fought the whole way”.