It's been a long and fractured road to recovery for Bath, England and Lions centre Jonathan Joseph, but the man once considered the best outside centre in the world is back to fitness and once again impressing in a Bath backline that finally seems to be clicking. With one particularly well-executed try assist, England boss Eddie Jones has an extra decision to be made in his midfield.

Bath's fragmentary form has been the plight of many a Recreation Ground goer since their rise to the 2015 Premiership finale and eventual fall from grace under the guidance of former England defence coach Mike Ford. With former Crusaders boss Todd Blackadder failing to find firm footing whilst in charge of the Blue, Black and white, consistency has been a rare treat rather than a stable diet.

At times, Bath have looked second best only to league powerhouses Saracens and Exeter and at others have looked like men on the verge of relegation rather than Champions Cup qualification. In the effort of staunching the haemorrhage, Blackadder recruited Leinster attack coach Girvan Dempsey over the summer, hoping to light a fire under his side's questionable form and secure the type of regular results that befit their playing squad's quality.

Change takes time and developing an attack within a side bereft of some of their most talented international talent due to long-term injury, whilst also dealing with the steady flow of knocks and niggles that come with playing at the elite level, is an Everest-sized challenge for most coaches. But the one-time European Champions seemed to be ticking again when on the attack against Newcastle Falcons last Saturday, and the hope of a return to form is once again being dangled in front of faithful fans.

Between the influence of summer recruit and matchday captain Will Chudley at scrum-half, Welsh internationals Rhys Priestland and Jamie Roberts and a fit-again England pairing of Jonathan Joseph and Joe Cokanasiga, Bath's season's ambitions are looking up after a disappointing pool stage exit in the Champions Cup.

The fans will not be alone in their enjoyment of last weekend's triumphant attacking game against league strugglers Newcastle Falcons. England boss Eddie Jones will have taken some satisfaction in the spectacle of a fit-again Joseph, with the 27-year-old making no secret of his ambitions to push on and compete for the white thirteen jersey that at a time seemed sewn onto his torso.

An example of Joseph's immediate return to form came just after the half-hour mark on Saturday. The 40-times-capped centre spotted the clear opportunity to send England's colossal winger, Cokanasiga, over for an acrobatic score whilst simultaneously sending the message to Jones that he is ready to compete with man of the moment Henry Slade for the right to start at outside centre for England.

Just inside the 30th-minute, former England winger Semesa Rokoduguni managed to break past his wouldbe Falcons tacklers, hurrying 30 metres upfield and forcing Newcastle fullback Simon Hammersly to come up from covering the backfield and take on the elder of Bath's Fijian-born England wings. By beating the initial defenders and forcing Hammersly to commit, Rokoduguni opens up the space for Cokanasiga's eventual score.

Next up, gargantuan lock Dave Attwood, who recently penned a deal to return to Bristol, challenges Newcastle's defensive line once more before Prisetland and Joseph - numbered 10 and 13 respectively - get their hands on the ball. Attwood makes a healthy 10 metres by the time he is finally brought to the ground and loosehead prop Nathan Catt plays nine to get the ball into Priestland's hands before Newcastle are able to organise and shut down Bath's opportunity. 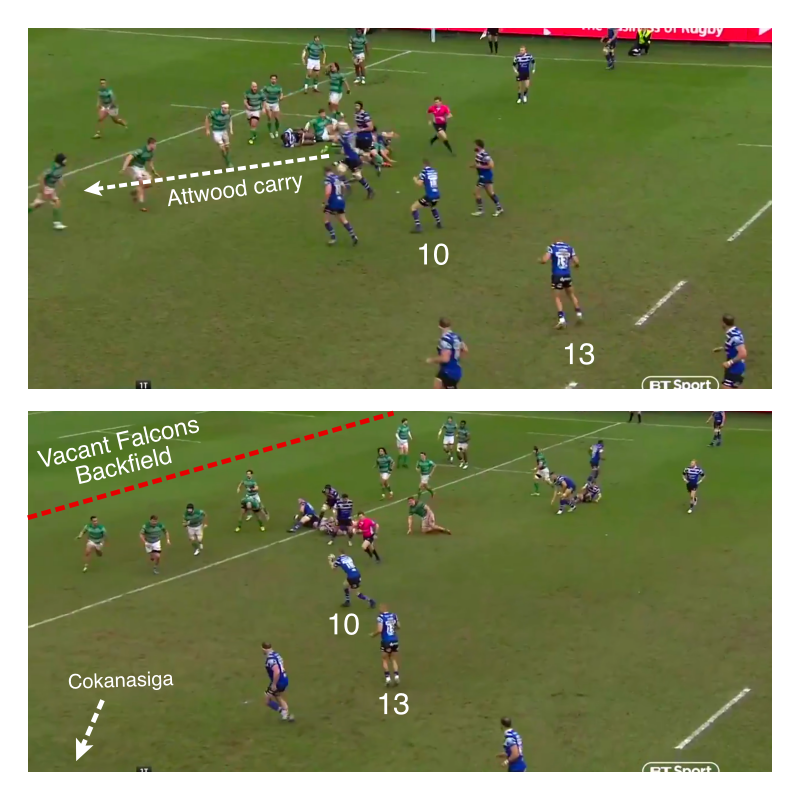 With no real angle to work with, the 50 cap Welshman shifts the ball on to Joseph to make the most of the cavern of space behind Newcastle's defensive line. With Hammersly unable to dislodge himself from tackling Rokodoguni quick enough to get back into position, Joseph drops the ball onto his foot to shoot along the turf and split his opposite number Chris Harris and left winger Sinoti Sinoti. Joseph's kick finds just enough room for Cokanasiga to collect the ball and gracefully spring into the air in his attempt to avoiding the touchline, resulting with a with a finish Torvill and Dean would be proud of.

Prior to his untimely foot injury last year, Joseph had been making a concerted effort to widen his distributing skillset, with a number of high-pace, long-range passes to put his wingers into space. At the time, this seemed to be an attempt to stave off the efforts of Slade and retain England's starting berth at outside centre. Now, Joseph finds himself fighting up the hill, no longer standing atop the England pecking order batting away the advances of Slade and Alex Lozowski; a far greater challenge.

At this point, it seems unlikely Joseph will manage to unseat Slade short of injury, but continuing the form he has displayed since returning from injury is a surefire way to, at the least, provide an excellent like-for-like replacement; with an extra gear of pace to spare.